At KiwiLeds we want to help Kiwis to save money, so we’re here to provide the latest technology in LED lighting at the most competitive prices.

We Guarantee Quality That Lasts – And If It Doesn’t We Replace At No Cost.

We import quality LED lightbulbs from trusted sources and straight off the production line – which means we apply a lower markup than most retail outlets. Because we want the very best outcome for all our customers, we are happy to be flexible and can customise packages for electricians and anyone in the electrician and lighting industry. And if our LED lightbulbs don’t last for as long as we say they will, we’ll replace them at no cost.

Although initially more expensive than traditional light bulbs, LEDs save you money in the long term because they use 92% less energy and they last 15 times longer. At KiwiLeds, we are excited to be in the process of developing a “calculation app” that will be launched on our website in coming weeks – by entering the number of traditional light bulbs that provide you with lighting on a daily basis, the app will be able to calculate exactly how much money you would save if you switched to KiwiLeds LED light bulbs – you’ll be amazed!

Daylight Saving Is Upon Us – Make The Switch Now!

Don’t forget that it’s daylight saving time is here – time to set the clocks back and get ready for the long winter nights ahead, the perfect time to make the switch to LEDs!

So you’ve changed all your incandescent bulbs to cheaper-to-run Energy-saver bulbs – Great! But did you know there is an even brighter, more energy efficient, environmentally friendly alternative?

The Advantages of LEDs Over Incandescent Lights

LEDs are fast replacing incandescent bulbs all over the world. Reasons for this include:

LED – Light Emitting Diode
How do they work?
I’m assuming that if you’ve got this far, you know something of the difference between incandescent, compact fluorescent, halogen and LED bulbs so I shan’t go into depth explaining the difference between each – there are plenty of other websites that do a fine job of that and I would only be copying them.

LED lights are very small semiconductor diodes that are capable of creating light. They are very similar to a standard light bulb except they are much smaller and don’t use filament – which is the part that gets really hot and fails in incandescent bulbs. Instead of a filament, an LED produces light using the movement of electrons across a semiconductor sheet. As the electrons pass across the semiconductor, they move into small holes within the semiconductor sheet, which causes it to produce visible light. This form of lighting is called Solid State Lighting which means, that unlike incandescent bulbs which relies on the filament remaining in a stable position, they don’t mind being shaken or taking the odd knock. Because LED’s are so small and produce so much light for their size, they are extremely efficient and versatile.

LED’s can be many different colours – even ultraviolet or infrared. The colour of the light depends on the material that is used to make the semiconductor sheet and the current that is passed through it. This also makes them extremely versatile for a myriad of different applications.

New LED bulbs are grouped in clusters with diffuser lenses which means the angle of the light beam can be a narrow (30 – 45 degrees for spotlight applications) or broad (60 – 120 degrees ideal for home use) making them vastly more versatile. Being a more directional light has it’s limitations however. It is great for recessed or under-cabinet lighting, but not so good for table lamps or chandeliers. New LED bulbs designs address the directional limitation by using the diffuser lenses and reflectors to disperse the light more like an incandescent bulb.
Some LED Terminology
OK, so during the process of my research I have come across some words and technical terms that need some more explanation because, unless you are an Electrician or my hubby (who knows something about just about everything) you may not know what they are. And to all the Electricians out there who might read this and point out some errors – please let me know (gently) by email and I shall correct it forthwith…

Lumens: Lumens measure “luminous flux”. This is a measure of the amount of light produced by a light source as perceived by the human eye. The more Lumens, the brighter the light. Lumens, not watts, tell you how bright a light bulb is, no matter the type of bulb. You can use Lumens to compare the brightness of any bulb, regardless of the technology behind it and regardless of whether it’s incandescent, CFL or LED. In practical terms, when buying a light bulb, we should look for bulbs which produce more light but consume less energy. Understanding Lumens as a measure of brightness makes it easier to select the most efficient bulb for your application.

Lux: The difference between the lux and the lumen is that the lux takes into account the area over which the luminous flux is spread. 1000 lumens, concentrated into an area of one square metre, lights up that square metre with an illuminance of 1000 lux. The same 1000 lumens, spread out over ten square metres, produces a dimmer illuminance of only 100 lux. A point to bear in mind is that incandescent and CFL bulbs illuminate in a 360-degree spherical pattern regardless of the shape of the bulb. LED’s depend on the shape and composition of their lenses and package structure to direct the light where it is needed. When we illuminate an area with a ‘spherical bulb’ source, only a small proportion of the lumens are delivered as lux to the surface we are lighting – the rest is lost. LED bulbs, on the other hand, put out directional light, sending all of the light exactly where it is needed.

Watts: Watts refers to the amount of power consumed to drive a light bulb. The wattage also takes into account the sum of heat generated as well as the energy of the light emitted. We have all developed expectations about how bright a 40, 60 or 100 watt bulb should be. We tend to apply that same frame of reference to LED bulbs, however, incandescent bulbs produce alot of heat so the number of lumens per watt (or brightness per power unit consumed) is very inefficient – only around 12 lm/w (lumens per watt). LED’s on the other hand are consistently achieving around 90 lm/w which means that they can produce the same amount of brightness as a halogen and only use a fraction of the amount of power.

Correlated Colour Temperature (CCT): Is the measure used to describe the relative colour appearance of a white light source. CCT indicates whether a light source appears more yellow/gold/orange or blue, in terms of the range of available shades of “white”. CCT is given in kelvins (unit of absolute temperature). 2700k is “Warm” and 5000k is “Cool”. The typical light colour we are used to in indoor home lighting is “warm” 2700 – 2800k.
Picture
Some Benefits of LED bulbs
I’m guessing that you probably don’t need much convincing of the benefits of LED’s. The technology surrounding this simple little piece lighting has advanced so rapidly and with so much competition that any limitations or downsides, have been addressed and dealt with pretty quickly. But, just in case you still need a little bit of convincing, this section is for you…

Longer-lasting: LED bulbs last up to 10 times longer than CFL (compact fluorescent Light) and so much longer than a typical incandescent bulb that it’s hardly worth mentioning. This is a very big claim but one that seems to be consistent throughout the industry.

Durable: since LEDs do not have a filament, they are not damaged under circumstances when a regular incandescent bulb would be broken. Because they are solid, LED bulbs hold up well to jarring and bumping – making them ideal for torches, car lights, bike lights, etc.

COOL: LEDs do not cause heat build-up which is a problem in incandescent, CFL and halogen bulbs. Heat build-up causes discolouration and brittleness in the light fixtures. LEDs are manufactured with a clever little heat sink in the base of the bulb which draws heat away from the diode. An LED produces only 3.4 btu’s (british thermal units) per hour, compared to 85 for incandescent bulbs.

Mercury Free: no mercury is used in the manufacturing of LEDs making them safer to make and dispose.

More efficient: LED bulbs use only 2-20 watts of electricity (1/3rd to 1/30th of incandescent or CFL). LED bulbs used in fixtures inside the home save electricity, remain cool and save money on replacement costs since LED bulbs last so long. Small LED flashlight bulbs will extend battery life 10 to 15 times longer than with incandescent bulbs.

Cost-effective: although LEDs are initially expensive, the cost is recouped over time and in battery savings. But the cost of new LEDs has come down considerably in the last few years and is continuing to go down. Today, there are many new LED light bulbs for use in the home, and the cost is becoming less of an issue.

Light for remote areas and portable generators: because of the low power requirement for LEDs, using solar panels becomes more practical and less expensive than running an electric line or using a generator for lighting in remote or off-grid areas.
Different types of Base Unit
This doesn’t need much explanation – but it still needs some explanation. I’m hoping that pictures will do the trick…
Picture
These are the most common base units for home use. But as the technology develops, so does the choice available. 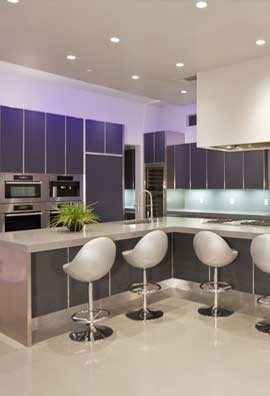 Brighten up
the kitchen
with LED's